TL;DR Fission is happening and our first "Milestone" is targeted at the end of February. Please file bugs related to fission and mark them as "Fission Milestone: ?" so we can triage them into the correct milestone.

A little than more a year ago, a serious security flaw affecting almost all modern processors was publicly disclosed. Three known variants of the issue were announced with the names dubbed as Spectre (variants 1 and 2) and Meltdown (variant 3). Spectre abuses a CPU optimization technique known as speculative execution to exfiltrate secret data stored in memory of other running programs via side channels. This might include cryptographic keys, passwords stored in a password manager or browser, cookies, etc. This timing attack posed a serious threat to the browsers because webpages often serve JavaScript from multiple domains that run in the same process. This vulnerability would enable malicious third-party code to steal sensitive user data belonging to a site hosting that code, a serious flaw that would violate a web security cornerstone known as Same-origin policy.

Thanks to the heroic efforts of the Firefox JS and Security teams, we were able to mitigate these vulnerabilities right away. However, these mitigations may not save us in the future if another security vulnerability is released exploiting the same underlying problem of sharing processes (and hence, memory) between different domains, some of which may be malicious. Chrome spent multiple years working to isolate sites in their own processes.

We aim to build a browser which isn't just secure against known security vulnerabilities, but also has layers of built-in defense against potential future vulnerabilities. To accomplish this, we need to revamp the architecture of Firefox and support full Site Isolation. We call this next step in the evolution of Firefox’s process model "Project Fission". While Electrolysis split our browser into Content and Chrome, with Fission, we will "split the atom", splitting cross-site iframes into different processes than their parent frame.

Over the last year, we have been working to lay the groundwork for Fission, designing new infrastructure. In the coming weeks and months, we’ll need help from all Firefox teams to adapt our code to a post-Fission browser architecture.

Fission is a massive project, spanning across many different teams, so keeping track of what everyone is doing is a pretty big task. While we have a weekly project meeting, which someone on your team may already be attending, we have started also using a Bugzilla project tracking flag to keep track of the work we have in progress.

Now that we've moved past much of the initial infrastructure ground work, we are going to keep track of work with our milestone targets. Each milestone will contain a collection of new features and improved functionality which brings us incrementally closer to our goal.

Our first milestone, "Milestone 1" (clever, I know), is currently targeted for the end of February. In Milestone 1, we plan to have the groundwork for out-of-process iframes, which encompasses some major work, including, but not limited to, the following contributions:

If you want an up-to-date view of Milestone 1, you can see the current Milestone 1 status on Bugzilla.

If you have a bug which may be relevant to fission, please let us know by setting the "Fission Milestone" project flag to '?'. We'll swing by and triage it into the correct milestone. 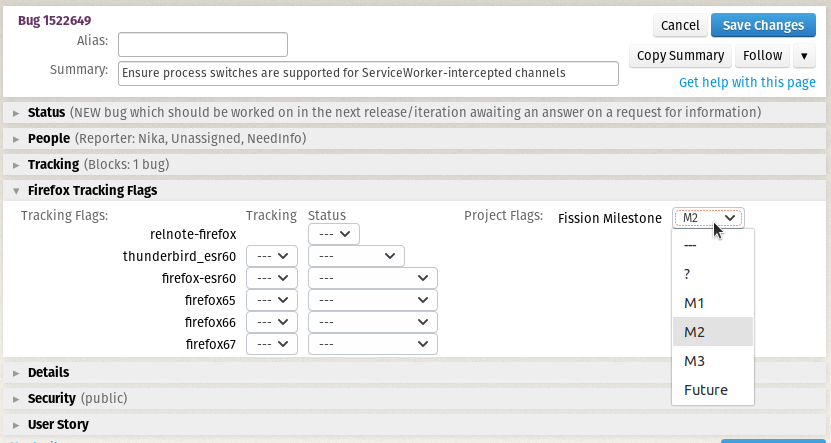 If you have any questions, feel free to reach out to one of us, and we'll get you answers, or guide you to someone who can:

In order to make each component of Firefox successfully adapt to a post-Fission world, many of them are going to need changes of varying scale. Covering all of the changes which we're going to need would be impossible within a single newsletter. Instead, I will focus on the changes to actors, messageManagers, and document hierarchies.

Today, Firefox has process separation between the UI - run in the parent process, and web content - run in content processes. Communication between these two trees of "Browsing Contexts" is done using the TabParent and TabChild actors in C++ code, and Message Managers in JS code. These systems communicate directly between the "embedder", which in this case is the <browser> element, and the root of the embedded tree, which in this case would be the toplevel DocShell in the tab.

However, in a post-Fission world, this layer for communication is no longer sufficient. It will be possible for multiple processes to render distinct subframes, meaning that each tab has multiple connected processes.

Components will need to adapt their IPC code to work in this new world, both by updating their use of existing APIs, and by adapting to use new Actors and APIs which are being added as part of the Fission project.

For many components, the full tree of Browsing Contexts is not important, rather communication is needed between the parent process and any specific document. For these cases, a new actor has been added which is exposed both in C++ code and JS code called PWindowGlobal.

Unlike other actors in gecko, such as Tab{Parent,Child}, this actor exists for all window globals, including those loaded within the parent process. This is handled using a new PInProcess manager actor, which supports sending main thread to main thread IPDL messages.

JS code running within a FrameScript may not be able to inspect every frame at once, and won't be able to handle events from out of process iframes. Instead, it will need to use our new JS Window Actor APIs, which we are targeting to land in Milestone 1. These actors are "managed" by the WindowGlobal actors, and are implemented as JS classes instantiated when requested for any particular window. They support sending async messages, and will be present for both in-process and out-of-process windows.

C++ logic which walks the frame tree from the TabChild may stop working. Instead, C++ code may choose to use the PWindowGlobal actor to send messages in a manner similar to JS code.

C++ code may also maintain shared state on the BrowsingContext object. We are targeting landing the field syncing infrastructure in Milestone 1, and it will provide a place to store data which should be readable by all processes with a view of the structure.

The parent process holds a special subclass of the BrowsingContext object: CanonicalBrowsingContext. This object has extra fields which can be used in the parent to keep track of the current status of all frames in one place.

The Tab{Parent,Child} actors will continue to exist, and will always bridge from the parent process to a content process. However, in addition to these actors being present for toplevel documents, they will also be present for out-of-process subtrees.

As an example, consider the following tree of nested browsing contexts:

Under e10s, we have a single Tab{Parent,Child} pair for the entire tab, which would connect to 1, and FrameScripts would run with content being the 1's global.

I hope to begin keeping everyone updated on the latest developments with Fission over the coming months, but am not quite ready to commit to a weekly or bi-weekly newsletter schedule.

If you're interested in helping out with the newsletter, please reach out and let me (Nika) know!.

Thanks for reading, and best of luck splitting the atom!